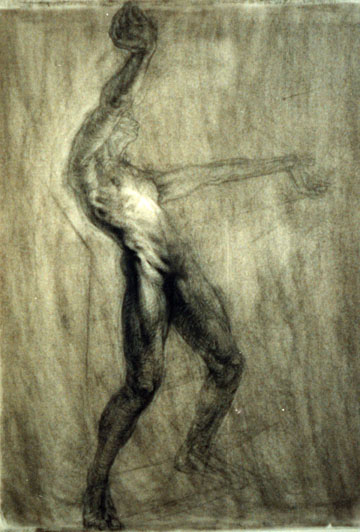 Death touched my life when three people near me died in the same year. The horrible result was that I felt nothing.

One of them was a Dutch woman I didn't know very well, but we were related in a sense. I knew she had been ill for some time with breast cancer. She had a husband and four children, the oldest being eleven or twelve years old. I was told that she was ready to die, and I was also told that she would like to meet with me.

The next day was gray with wet clouds, which is typical for Holland. The bedroom was dark (light hurt her eyes) and she seemed recessed in the bed far away among the pillows. I sat on the bed and I felt uncomfortable being there, and I waited on her need. I couldn't hold her hand because she felt too much pain when she was touched. She started telling me that though she didn't know me well my art was wonderful. She described the painting Denouement, the light in it and the beauty of the lovers in it. She told me, “No matter how difficult life can be for you, you must always paint.” She died two days later.

The other person was a friend from New York. I had known him for several years. He was my best friend's lover and became her husband. I once went up to their brownstone apartment, they buzzed me up; the apartment door was open though no one was there to greet me. I heard giggling and laughter coming inexplicably from a closet. They were in the closet, naked and enclosed together in one oversized white dress shirt. He died a gruesome death from his battle with a brain aneurysm. He struggled with three or four weeks of seizures until the swell of the blood destroyed his brain.

The last of the three, and the closest to me, was my grandmother. She was a no nonsense, stylish, hard-working Canadian turned American; and she loved paintings. Well, not all kinds of paintings. When I was in my teens I remember her ranting with humor about the Rothkos spread in some national magazine. She said, “This stuff is just like when the house painter applies different colored test squares. And he asks, 'Lady, which one do you want?'”

Later, when I was making my first trip to Italy, she asked me if I would do her a favor and place a rose on Michelanglo's tomb. Which I did.

After she died, I thought there is something terribly wrong with me if I can not feel the loss of her and of these other friends. I must do something to access my mourning. I decided I would do art therapy. That for me was to draw themes about these losses.

I began with the model that posed for a life-drawing class I was instructing. I pulled him aside during the break an explained that I needed to work on a series based on the theme of death and mourning. He looked visibly startled and seemed to back away from me; I don't know if he physically backed away or not, but he did, for sure, internally. He told me that he could not answer me now but he would think about it and respond when he came for the next session.

He and I sat down for coffee during the break a week later. He told me that he would model for me, but he needed to tell me something relevant to the project. He said, “Five years ago to this week, my father shot my mother and then he shot himself.”

Louis came to model and I began my art therapy.

Aside from Louis, the project consisted of 14 or 15 other models. All the models brought to the project their particular experiences of loss, contributed their vulnerability, their insights, and their ability for bodily expression. By the time the series was finished I had gone through my mourning as assuredly as the women of the Mediterranean rend the space surrounding their dead.

A postscript to this story is that several months later a dear friend called me long distance and told me that his father had died, and he went on to discuss some irrelevant issues. Instead of feeling uncomfortable, I felt at peace, relaxed, and empathetic enough to sit back and listen very carefully and even hear what was said between the words as my friend talked to me about life.